Earlier this week, Great Britain’s Shauna Coxsey joined us as the newest addition to the FrictionLabs Pro Team. Welcome aboard Shauna!

Off the wall, Shauna is friendly and engaging, quick to laugh. On the wall––well, that’s where her competitive fire burns. She moves gracefully, with mind-bending power and control. She makes impossible boulder problems look doable. Oh, and she wins. She wins often.

After taking 1st place overall in last year’s IFSC Bouldering World Cup, Shauna is once again competing for the title. The next leg of the 2017 competition circuit is being held this weekend (June 9 – 10) in Vail, Colorado. Before she escaped to the mountains to focus on defending her title, Shauna let us in on a few of the ways she prepares for competitions. 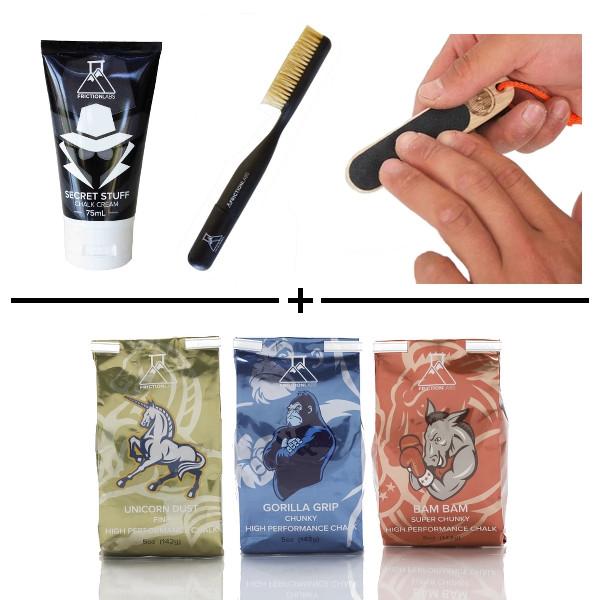 FEATURED PRODUCT
Friction Addiction Bundle!
Get It
us

FL: You clinched the 2016 Bouldering World Cup last year after another solid performance in Vail. How does your mentality compare between last year and this year, as defending champion?

S: At the end of the 2016 season I injured my shoulder and had to have surgery. I never really got the chance to think about what it would be like coming back as the defending champion. In my mind I was coming back from injury and my goal was always to be fitter, stronger and better than before. Heading into the first competition of the 2017 circuit I had no idea what to expect. I had no idea where I would be at against the other girls. It was totally crazy to win that event.

FL: You climb, train, and travel with your best friend, Leah Crane. How did you develop your relationship, and how do you help each other in your training process?

C: Leah and I have known each other for a really long time. We met competing in the junior comps almost 20 years ago and we’ve been mistaken as sisters ever since. It wasn’t until a few years back when we were both traveling on the World Cup circuit that we became really good friends. We started training together and traveling to the comps and we just had so much fun! Leah is one of the most patient, relaxed people I know and she’s definitely good at putting up with me. We are both positive, optimistic people and we both love to have a good time which makes training really enjoyable, and therefore I think we get more out of training when we're together.

FL: What does a typical day or week of training look like for you?

S: During the off season I will train 6 days a week and I’ll have one, two or sometimes three sessions a day. Generally I climb five times, do three sessions on the Beastmaker, 3/4 sessions in the fitness gym and I also run a little bit too. Plus I walk my puppy and stretch a lot. I train less during the competition season as the events are so close together.

FL: You switched to a new climbing coach last summer, after winning the World Cup. How has your approach to training changed since then?

S: My new coach, Adela Carter, has to be the most psyched person I have ever met! She has a really interesting approach to training and I have learned a lot from working with her already. Adela also embraces the fun element to training which I definitely love! I am really looking forward to working with her over the winter to see how much progress we can make.

FL: Many of us would love to know how you perform so well under pressure! Do you have any practices or habits that you've developed to mentally prepare for competition?

S: That's  a good question and one I think many people would like a simple answer to. Unfortunately I don’t think there is a straight answer. Experience is invaluable. Over the years I have tried many different methods to mentally prepare for competition but I think that the more experience I gain the better I am. I do think that being positive helps though and I do think that's something you can train.

FL: What are your future goals in terms of competition climbing? And what do you think is the next step?

S: After my shoulder surgery last year I was so determined to come back stronger. I was working with a great team over at Harris and Ross and thanks to Red Bull and Adidas I had a brilliant surgeon and great care after. My goal for this season was to come back stronger. I really had no idea where I would be at against the other women. I had no idea how my shoulder would be doing and my goal was simply to get to the World Cup feeling fitter and stronger. I wanted to be satisfied with my performances. I haven’t yet thought about my more long term goals in competition climbing as I just wanted to get back from my surgery. I am really happy with how this season has gone so far and I am already looking forward to writing down some new goals and training hard.

FL: FrictionLabs is psyched to have you on the team! We have to ask––what’s your favorite chalk blend (or other goody)?

S: I love the Secret Stuff :) Definitely feels like a secret weapon heading into the competitions. 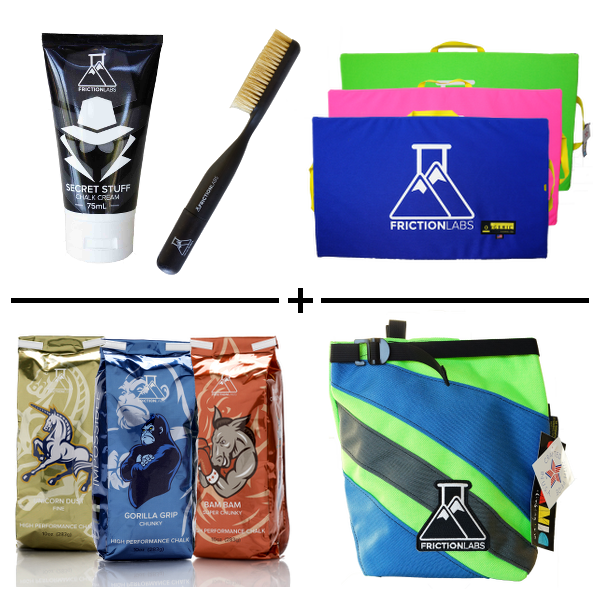 Bouldering Starter Kit + Free Shipping!
Check It Out
us

Chalk Bucket - Includes 5oz of Free Chalk
Check It Out
us

Climbskin
Check It Out

Bam Bam (Super Chunky)
Check It Out
Subscribe
We only send emails we'd be psyched to receive ourselves.