Paul Robinson: Climbing to the Far Ends of the Earth

FrictionLabs caught up with world-famous climber and classically trained artist and painter Paul Robinson about his goal of bouldering on every continent, what he's doing to get stronger, and his new film, Uncharted Lines, will inspire others to explore different types of rock in new places.

Tell us about yourself: How did you get into climbing? How many days a week do you climb? What type of climbing do you do?

I went to a birthday party when I was 10 years old. After that day, I was hooked and it was all I wanted to do. It soon became the only thing that I wanted to do. I quit all other team sports to focus on climbing.

I usually climb about 5 days a week and tend to primarily climb outside, but I like to train in the gym at least one day a week if possible. I think making sure to balance a little bit of indoor climbing/training with your outdoor climbing keeps your fitness up.

I like to make sure I have a relaxing morning, so I wake up moderately early. I never skimp on breakfast and I always pack a good lunch that includes something sweet.

My go-to breakfast is a big breakfast burrito I make every day. Onion, zucchini, mushroom, spinach, beans, egg, avocado, and a delicious hot sauce with a little salt and pepper wrapped in a tortilla. Yum!

My lunches tend to be a lot more simple. I tend to do an almond butter and banana sandwich with a Clif bar. It's lightweight and easy to pack for big hikes.

Why do you climb? Keeping it simple is fine, but don't be shy about taking this answer as far down the rabbit hole as you want to go. We'd love to hear it.

In short, it’s the only activity I’ve ever done that I’ve never gotten sick of and can be physically in the act of climbing and looking forward to the next day of climbing. But in terms of actually climbing- I love that every boulder problem or route is unique; unlike many other sports where you are striving to perfect a single thing, climbing is never the same and you are always having to solve a different puzzle.

What do you think is your personal biggest weakness in climbing? How do you address it?

Power moves. I try to train power but for the most part I seek out beta that is more technical and unique in an attempt to remove the need for that power.

To train power, I climb in the gym, which tends to be a lot more powerful than climbing outside. I have been doing core, push-ups, and even some weighted pull-ups to try and big some of those big muscle groups!

Earth Treks climbing gyms tend to be my favorites, especially the one in Timonium, Maryland.

Tell us about your new video project, Uncharted Lines. What was the inspiration? What are you hoping to achieve? Where are you at in the process?

Uncharted Lines is a film about exploration. It delves into the lives of some of the best climbers in the world who have dedicated their careers to taking the road less traveled. It is one thing to go to Hueco and climb V14 and V15; however, that is not what the essence of this film captures. Uncharted Lines pays homage to those who are developing and creating new climbing areas for future generations. For those who came before us, like Fred Nicole, Klem Leskott, etc. We strive to travel to the furthest parts of the world in search of the unknown and what may become the most perfect boulder problem in the world. Where would we be today without the climbing pioneers that led us here? Probably still on Flagstaff Mountain in Boulder, Colorado, making up variations to the Undercling Traverse.

The film actually came about years ago when I had a personal goal to establish a V15 boulder problem in an area that hadn’t been explored on every continent. I realized this was a lofty goal that would require a lot of time and research and might actually not be possible at all. Then the idea changed into a hard bouldering problem in an area on each continent. Then I realized this movie would be hours long! So instead, we went to a few continents for this film and hope that it’s successful enough with our audience that we can make a volume II and go to the other locations that we were unable to explore due to funds and time.

With this film, the goal is to inspire other climbers to think outside the box, to explore new places, to travel outside of their comfort zones and to further the development of climbing in a respectful way that is minimally impacting on the environment. Climbing has the power to take us to far off lands we would never experience otherwise, but many people don’t take advantage of this and they prefer to climb in places where they are guaranteed to climb multiple climbs of high grades. If that’s your thing, then that’s fine. But there is this whole other side of climbing that is more about getting in touch with nature, exploring the world, interacting with new people, and sharing the exploration process with like-minded people. I’ve realized how worthwhile it is to skimp on everyday life in the States and save my money as much as possible, so I have that extra money to go to Zimbabwe or Russia, or wherever it might be. Pursuing a passion for travel and climbing has truly taught me the value of the dollar and has helped me to appreciate everything I have, and I hope other climbers out there will get the travel bug, learn about the rest of the world, interact with climbers in different countries, explore different types of rock in new places, and really value the lives they were given.

We have two sections left to film and will be premiering the film at the Boulder Theater on January 25, 2017.

If you could give a single tip to a new climber, what would it be?

Lifting weights and being physically strong are not how you go from a beginner to an advanced climber. Climbing is like dancing; it is a technical sport that requires complete body awareness. There are so many elements that go into climbing that are often overshadowed: learning about the beta that works for you, trust in yourself and your abilities; trust in those you are climbing with; proper use of toe hooking, heel hooking and knee bars; confidence in moments that aren’t particularly safe. So much goes into being a great climber, but it takes time and patience to get there. If you are an impatient person and just want to focus on being the best and as quick as possible, it might not be the right sport for you.

Tell us about a time you were in a funk and felt like your climbing skill wasn’t improving. How’d you get out of it?

Climbing is just as much physical as it is mental. Sometimes you have to take a step backwards before you take a step forwards. There have been times when I needed to build up confidence for a project because I had been so beaten down from it. Climbing new boulders builds confidence and allows you to come back to your boulder with fresh perspective and hopefully the confidence and strength that will get you to the top.

Given how much you climb, what are some techniques you use to prevent injury?

First and foremost, warming up properly has always been super important to me. I need to warm up my muscles, but also my tendons and ligaments. Since I have been climbing for so long, I know when my body is ready to try hard and I make sure not to try anything really difficult until I know I am 100% prepared. To warm up I will do some very light stretching followed by a series of easier climbs. For me I don't see a point in climbing v8-11 or whatever to finish my warm up. I can really get anything I would need out of v0-v5. I will climb statically at first and then incorporate some dynamic movements on these climbs. I would say I take about 20-30 minutes to do all of this and then feel ready for the hard stuff.

To keep myself in condition, I do a combination of acupuncture and massage with Steve Rizzolo at Boulder Sports Acupuncture in Boulder, Colorado. Steve has brought me back when I’ve been injured but also does a series of preventative maintenance techniques to reduce the chance for injury. After a hard workout, it’s important to get the muscles to recover and be prepared for the next day, inside and out. Massage and acupuncture have allowed me to train hard and recover quickly and efficiently.

What was your "aha moment" with FrictionLabs?

I had heard about FrictionLabs for a few months, and in the beginning, I didn’t quite understand the hype. At the time, I was using Metolius Super Chalk, which was definitely a step above the rest of the brands I had tried. I had heard that heard FrictionLabs was even better, so I knew I needed to at least give it a try. The “aha moment” came the very first time I dipped my hand into a bag of FrictionLabs chalk. I immediately dumped out the Metolius chalk from my chalk bag and got myself a large supply of FrictionLabs, as I knew I would never consider using any other type of chalk again. 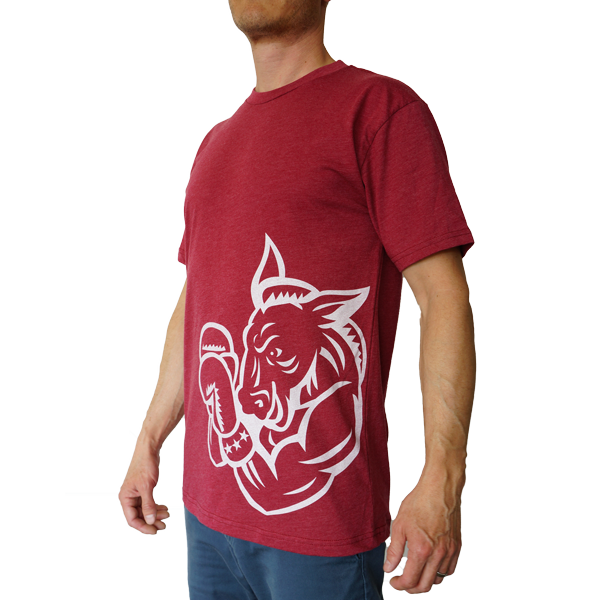 KO T - Mama said knock you out.
Check It Out

Secret Stuff Liquid Chalk
Check It Out
Subscribe
We only send emails we'd be psyched to receive ourselves.